Official Map And History Of The Town Of Liberty Grove

Official Map And History Of The Town Of Liberty Grove

THE HARBOR VILLAGES OF LIBERTY GROVE

Liberty Grove was created in 1859 from the northern part of Gibraltar Township. The state of Wisconsin was barely ten years old at the time. The early settlers were interested in harvesting the rich timber, abundant fish, quarries and cheap, but rocky, farmland. One need only look at its coastline to see the advantage of coastal transportation at the tip of the peninsula. These harbors shaped the pattern of small communities where thirteen piers had been built to ship out the quarried stone and timber felled by woodchoppers and cedar workers by 1882. Only Ellison Bay and Sister Bay remain in the 21st century with wide open cleared fields interspersed with wood lots and parks.

Peter Rowley entered one of the earliest Door County land claims in 1835 and operated a trading post for two years, but did not stay. Rowleys Bay was first developed by Daniel H. Rice in 1857. Lewis Osborne and Hon Osgood built a dock and launched a lumber business about 1870. S. A. Rogers built a store and large saw mill about 1875. The area is now known as a resort. It is interesting to note evidence of native settlements was found in this area.

Hedge Hog Harbor (Gills Rock) was first settled in the early 1850s by Allen Bradley who sold his claim to Andrew Weborg about 20 years later (1874). Woodchoppers Ole and Hans Tostenson built a pier, a store and bought up land in the area in the early 1870s. Elias Gill also built a pier there and gave the town his name.

By 1870 Sister Bay became a shipping port on the bayside of Door Peninsula, but the first settlers arrived in 1857 to build a pier and general store. A commercial pier and sawmill were built in 1869 by Pat and Thomas Dimon. The village was further developed by Andre Roeser from 1877-1915. When Sister Bay incorporated in 1912, it was no longer an official part of Liberty Grove even though it shares much history and family connections.

Ellison Bay was developed in 1866 where land speculator and timber dealer John Eliason built his lumbering business, pier and store in 1872. Once the land was logged, he sold the land to immigrant farmers. Andrew and August Seaquist began farming the area in 1865.

The North Bay pier was established in 1870 on the lakeside and had a post office for a short while.

By 1879 Hans Johnson and Peter Knudson had built a pier, store and saw mill at Newport with a post office by 1882. Newport school soon served the farming and logging population in the area. The business ended about 1904 and the area was deserted by 1915 and later became Newport State Park.

Axel Appel and lumber business partner Mr. Port built a pier and general store in 1888 on the lakeside opposite Sister Bay became known as Appleport. The Appleport school still stands as a private residence was built to serve the area population in the center of the peninsula.

The Liberty Grove Historical Society strives to honor and preserve the stories of these intrepid pioneers. 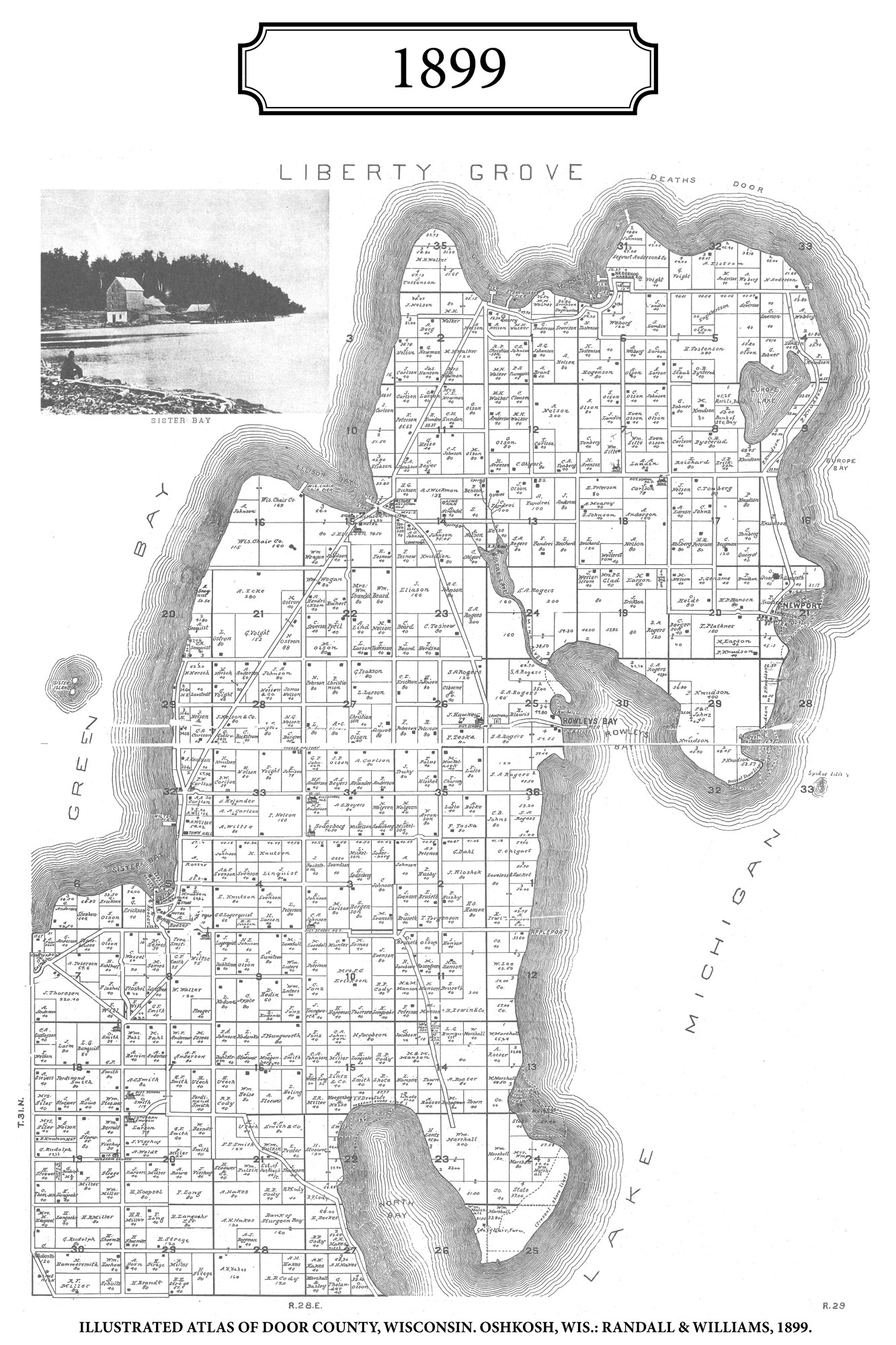 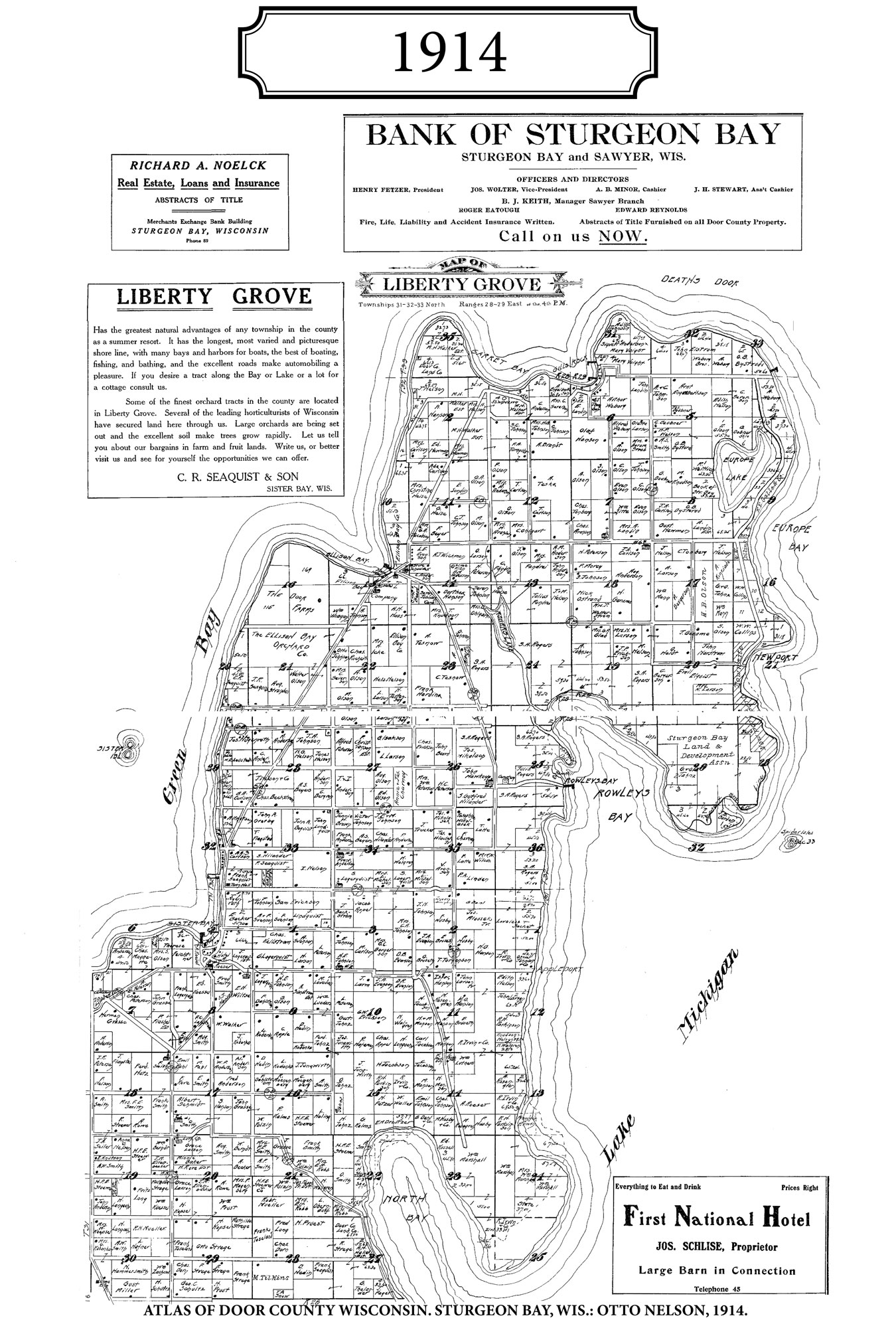 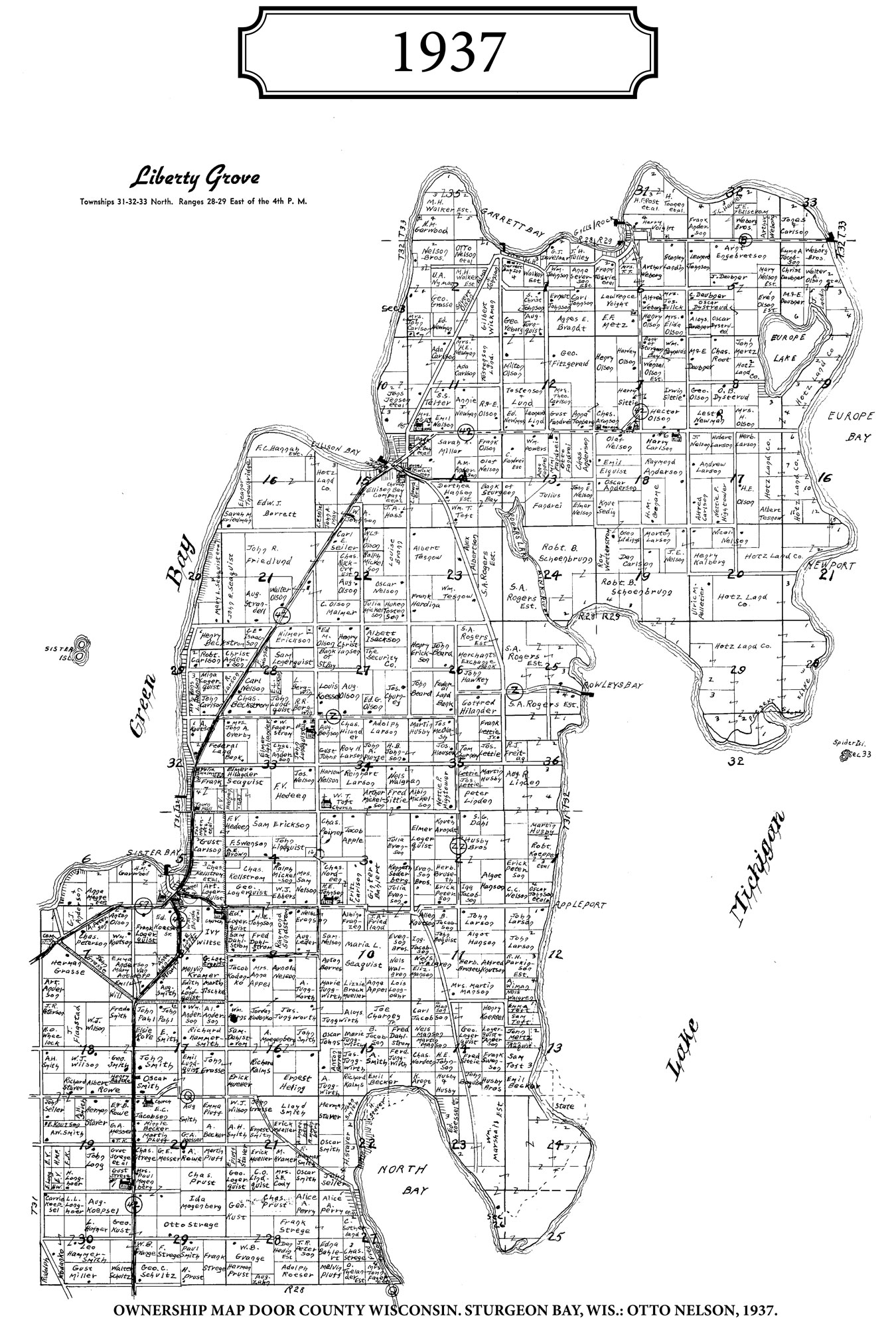